Andres Salaff was the supervising director on Adventure Time on the production of the show's sixth and seventh seasons.[1] He replaced Nate Cash, who left the series at the conclusion of its fifth season to work on former Adventure Time staff member Patrick McHale's series Over the Garden Wall.[2][3] Before joining Adventure Time, he was formerly a storyboard artist for JG Quintel's series, Regular Show. On May 18, 2015, Cartoon Network debuted three new pilots, including Salaff's' Ridin' with Burgess. [4]

He has since left Adventure Time to work as a storyboard artist for Uncle Grandpa.[5]

He provided the voice of Neddy in the episode "Bonnie and Neddy." [6] 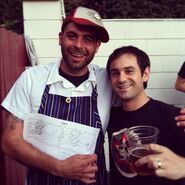 Andres Salaff on the right
Add a photo to this gallery

Retrieved from "https://adventuretime.fandom.com/wiki/Andres_Salaff?oldid=799156"
Community content is available under CC-BY-SA unless otherwise noted.