"All Your Fault" is the ninth episode in the fifth season of Adventure Time. It's the one hundred and thirteenth episode overall.

A mission to help the Earls of Lemongrab leads Finn and Jake to discover grotesque new developments in the Lemon Earldom.

Princess Bubblegum is doing research when she gets a message from the Earl of Lemongrab and Lemongrab 2 saying that they are out of candy and that they demand she send them all of hers, blaming her despite the fact she left them with enough to last a lifetime. Bubblegum sends Finn and Jake to the Lemon Earldom with Candy seeds so the Lemongrabs can grow more candy.

After traveling through the innards of the castle, they find the dungeon and discover the malnourished Lemongrabs. They find out that Princess Bubblegum accidentally left the formula of Candy life at Castle Lemongrab and they have used all their candy to create their own candy people. The reason they've locked themselves in the dungeon is to prevent their citizens from getting any candy so they can create more Lemon people. Finn and Jake give them the candy seeds, but instead of planting them they use the candy seeds to make another Lemon person. Finn suggests they see Princess Bubblegum. The Lemongrabs gather all the lemon people together and announce that they intend to steal all the candy from the Candy Kingdom, then use it to make an army that will steal all the candy in the world. They send Lemonjon to carry out the task of destroying the kingdom.

As Lemonjon heads to the Candy Kingdom, Finn remembers seeing the giant's organs spread throughout the Lemon castle. Jake says that they will never find his heart again, before Finn sees that there is a vent on the castle's exterior leaking the same juice they had previously seen pouring from Lemonjon's heart. Going inside the vent, they then attempt to stop him by smashing his exposed heart. However, doing so causes his heart to start beating and gives him emotions. He realizes that what he is doing is wrong and is confused at what he is about to do, but then decides to sacrifice himself for the Lemon Earldom, dissolving himself into a mountain of lemon candy for them to eat. Later, Princess Bubblegum erases the Candy life formula from the Lemongrabs' minds (Finn remarking that he also took the Candy life formula from the Lemon castle), causing Jake to ask if he could just do the same to the Lemongrabs' hearts as he did to Lemonjon's so they can be more selfless and less selfish. Princess Bubblegum responds that there is nothing wrong their hearts, but that they are just "like this." 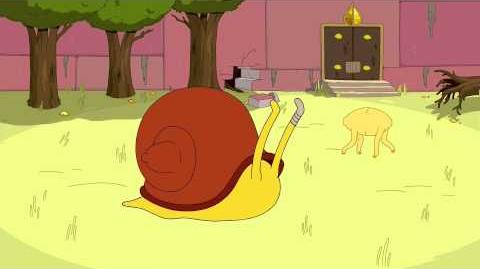