Steve Wolfhard
"All's Well That Rats Swell"[2] is the first short episode that is part of the sixth season of Adventure Time.

BMO discovers a rogue rat in the Tree House's flour, and attempts to drive off the creature after Finn gets sick.

BMO wakes up in the morning to complete his routine of kissing eggs "good morning," watering plants, feeding a duck and picking a mustache hair off Finn while he still sleeps. BMO goes to the kitchen where he heads to the cupboard to throw the hair strand away. BMO gets furious when he discovers a rat feasting on flour in the cupboard. He prepares to beat the rat with a "thumb war" game to which the rat wins by biting BMO's thumbs. BMO screams in pain and wakes up Finn. BMO goes overs Finn's bed to ask him for a boo-boo kiss. Finn kisses the bite mark, however as a result, he gets terribly sick.

Jake has also woken up to feed Finn in bed soup with a swirly straw. BMO now feeling guilty goes to the kitchen. He opens the cupboard where he finds the rat again feasting on the flour. BMO furiously gets payback by punching the rat in the face and the rat flees into a hole. BMO covers himself in the flour as he lets out a battle-cry "I WIN!" He continues this shout as he runs to the top of the Tree Fort.

BMO discovers a rat in the drawer 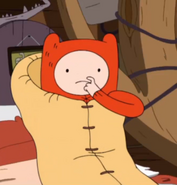 Finn gets infected by the rat bite 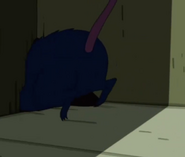 The rat runs away