Adventure Time with Fionna and Cake Issue 3 is the third issue of the six part miniseries by BOOM! Studios starring the gender-swapped characters.

Marshall Lee has shown up at Fionna and Cake's Tree Fort looking for help, much to Cake's contempt. He eventually convinces the ladies to help him when he tells of how "Boy's Night" had gone terribly wrong and how Prince Gumball is now trapped in a dungeon below his very own kitchen in the Candy Kingdom. Marshall Lee explains how Gumball found a map leading to treasure and the boys literally blew a huge hole right in the middle of Gumball's castle.

After going down the hole they find that the dungeon is filled with candy skeletons who attack them. However Fionna and Cake defeat them and find Gumball trapped in a giant piece of magic flan that hypnotizes people by reflecting their own beauty onto them. Cake turns into a spoon, which Fionna then uses to scoop Gumball free.

Gumball reveals that the reason why they didn't invite Fionna to "Boy's Night"  was because he had finally found the Ancient Enchanted Oven, a legendary artifact that can be used to create items that are magical, beautiful, and powerful. As he prepares the dough to make the item, he notices that the oven's pilot light is out. Luckily Flame Prince pops out Fionna's backpack and offers to help. As a thank you for all of the times that she has helped him, Gumball uses the oven to make Fionna a new sword with the ability to grant small wishes. Fionna, with sword in hand, wishes that she, Gumball, and Marshall Lee had matching "Boy's Night" t-shirts. Cake forces Fionna, Gumball, and Marshall to sit in her baby sling before they all leave the dungeon together.

Cover A by Natasha Allegri

Cover B by Zack Sterling 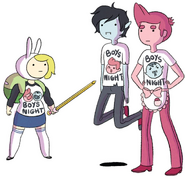