The issue begins during a monsoon rainstorm at night and Cake is telling Fionna her story of a woman made of fire and how she became the first volcano. Fionna is not impressed with the story, however, she sees baby Fire Lions running away from Ice Queen.

As Fionna and Cake prepare to confront her, Cake reveals she has made nine different swords to replace the sword Ice Queen tricked her with. The swords are less than impressive and Fionna is questionable about using them, but eventually using the "kitty litter sword."

Ice Queen is blasting ice at the Fire Lions for being in her snow banks. Flame Prince sees this and attacks her. However, he hesitates and Ice Queen freezes him and sticks an ice crystal she planned on using on the Flambits in him and lets him fall to the ground. However, he is saved by Fionna and Cake, who have come to confront the Ice Queen. The issue ends with Cake telling Fionna not to be checking out Flame Prince, much to Fionna's embarrassment.

It is a cold day and Fionna and Cake decide to put on their sweaters. However someone has stolen them. As they go hunt down the thief, they come across Prince Gumball, whose sweater was also stolen, and Marshall Lee, who doesn't need a sweater because he is a vampire. Marshall Lee saw the thief run into a cave and when they go to confront him they find the cave full of thousands of sweaters. The thief claims he needs them all because "the layered look is very IN right now," but he runs away when Fionna threatens him. Luckily, Prince Gumball finds the sweaters he had knitted for everyone in the cave and they all go back to Prince Gumball's castle for hot cocoa.

C2E2 Exclusive Cover
Add a photo to this gallery

Inside cover of comic
Add a photo to this gallery 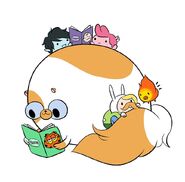 Retrieved from "https://adventuretime.fandom.com/wiki/Adventure_Time_with_Fionna_and_Cake_Issue_1?oldid=822016"
Community content is available under CC-BY-SA unless otherwise noted.