The "Adventure Time Theme Song" and opening title sequence features all of the main characters and also some of the minor characters. The theme is sung and played by series creator Pendleton Ward. It has the same lyrics as the animated short but there are some slight variations.

The opening title sequence starts with a view of a post-apocalyptic wasteland that features a rat inside of a broken television and several undetonated nuclear bombs. Next, in a snow-covered biome, are shown penguins, including Gunter and two other penguins hugging (with a tiny red heart floating above their heads) that make a few quick quacking sounds, and a Snow Golem sitting on a grassy hill nearby. Then the rest of the Ice Kingdom appears including Ice King flying next to his lair, spinning around to face the screen while activating his Ice Powers with his hands. It shows the Candy Kingdom and a large crowd of Candy People laughing and dancing in the middle of the road. After that, the camera quickly scales Princess Bubblegum's Castle, eventually passing the clouds to where we can see Princess Bubblegum as she smiles and waves while riding on the back of Lady Rainicorn. The camera then pans to the right, and zooms into a mountain range showing Marceline playing her Fender Precision Bass while sitting outside of her cave. She turns and hisses at the audience while showing her pointy teeth. Then outside of Finn and Jake's treehouse is the two-headed duck. The ending shows Finn and Jake's Tree Fort and then the two of them inside. BMO is seen sitting nearby. Finally, they pound their fists together and a loud smashing sound is heard as the theme song begins. This entire ordeal occurs approximately within the span of 12 seconds. When the show's title is seen, Finn (without his green backpack) and Jake float up using feathered wings sticking out from their backs while holding a white piece of cloth that says with Finn and Jake. Then, they are seen going somewhere as the lyrics go "C'mon grab your friends," and then Jake winks when the lyrics "Jake the Dog" come up, and Finn seems to bark and stick his tongue out when the lyrics "Finn the Human" come up. The sequence ends when Finn and Jake reach the top of a rocky mountain that they were climbing. Finn gets to the top and strikes a victorious pose while Jake lies down near Finn holding his leg as the show begins.

The opening title sequence starts with a view of the same two places where the same animals as the original. Then the same Ice Kingdom where the Ice Queen flying next to her lair as turned the same direction as the original. It shows the Candy Kingdom and different versions of the Candy people. After that, the camera quickly scales the castle, and passing the clouds where we can see Prince Gumball as he smiles and waves while riding on the back of Lord Monochromicorn. The camera then pans to the right, and zoom into the same mountain range showing Marshall Lee playing the same instrument sitting the same place. He turns and hisses at the audience while showing his same sharpy teeth. Outside the same treehouse is the same two-headed duck. The ending shows the same Tree Fort and Fionna and Cake inside and also the same BMO is sitting nearby and finally they pound their fists together and the same sound heard as the theme song begins. When the show's title is seen, Fionna (without her green backpack) and Cake float up using feathered wings sticking out from their backs while holding a white piece of cloth that says with Fionna and Cake. Then, they are seen going somewhere as the lyrics go "C'mon grab your friends," and then Cake winks when the lyrics "Cake the Cat" come up, and Fionna seems to bark and stick her tongue out while her head goes up when the lyrics "Fionna the Human" come up. The sequence ends when Fionna and Cake reach the top of a rocky mountain that they were climbing. Fionna gets to the top and strikes a victorious pose while Cake lies down near Fionna holding her hands as the show begins.

The opening title sequence starts with a view of a cave within the Ice Thingdom showing Patience St. Pim, who has still yet to thaw from her ice ball. Exiting the cave, a jail cell window can be seen along with two pink hands gripping the bars (Could be Princess Bubblegum  ). Past a rope bridge and up some stairs, a humanoid figure with a telescope can be seen riding Giant Duck  Considering the red boots, MA initials on the telescope, and proximity to what might be PB, it is probable that this is Marceline. Passing some mountains, the camera reaches the perched Ice Thing, who is missing his left jewel and in his future form. As the camera exits the Ice Thingdom, Ice Thing leaves his perch to fly beside the camera. The dreary overcast sky comes into full view as the camera and Ice Thing reach the Pup Kingdom. Large trucks can be seen moving into the Pup Kingdom and the camera quickly enters the Kingdom to scale the space elevator, only showing a glimpse of a single pup looking out a window. In the sky, a large diamond-shaped platform comes into view adorned with a flag, presumably representing the Pup Kingdom. On top of the platform, Gibbon (in his future form), along with two pups in spacesuits can be seen. As the Ice Thing Passes, Gibbon fires pink lighting bolts (not unlike the bolts fired by classic Ice King) at him, indicating an antagonistic relationship between the two. Entering the grasslands, immense statues of Finn and (maybe) Jake lie in ruin. Atop one of them, X  can be seen inside a tank, firing at O . Interestingly, a broken stone engraving on the ground reads FIN on one line, and JER on the next. If this plaque has any correlation to the wrecked statues, then the collapsed, dog-shaped statue could be in memory of Jermaine . Then outside of Marceline's cave is a possible descendant of the two-headed duck, riding a jetpack. Also outside the cave, a pup can be seen using binoculars to spy inside. The ending shows Marceline's house, then Shermy and Beth, who have taken up residence within it. Finally, they pound their fists together and a loud smashing sound is heard as the theme song begins.

When the show's title is seen, Shermy and beth float up using feathered wings sticking out from their backs while holding a white piece of cloth that says with Shermy and Beth. Then, they are seen within an urbanized, yet destroyed, Candy Kingdom as the lyrics go "C'mon grab your friends,". The Future Lumps Anti-Elemental can be seen spying on Shermy and Beth in this part. As the lyrics move to "We'll go to far off, future lands." Shermy and Beth can be seen riding on the head of a future version of Sweet P. As their names are listed, on a blue wall, Shermy and Beth look at the audience through small holes in the wood. Beth's full title is revealed as "Beth the Pup Princess" The sequence ends with Beth laying on her back in a pond as Shermy fishes from her belly. The two-headed duck flies by and the smoke from its jetpack spells out Adventure Time Shermy waves to the camera as the show begins.

Original and Fionna and Cake versions

The lyrics with ukulele chords to the theme song are as follows:

The lyrics with electric guitar chords to the theme song are as follows:

The lyrics with harmonica chords (possibly) to the theme song are as follows;

The lyrics with unknown chords to the theme song are as follows:

The following characters can be seen in the opening sequence:

Come Along with Me

There are many early versions of the title sequence that didn't get used. Many recognizable faces appear, including a worm, Ice King, Iceclops, Marceline, Princess Bubblegum, Lady Rainicorn, Phil, Tree Trunks, Gork, Wendy, and even the Snail.

The episodes "Fionna and Cake", "Bad Little Boy" and "The Prince Who Wanted Everything", all of which feature Fionna and Cake, use an alternate version of the opening theme performed by Natasha Allegri. The lyrics are the same except that Cake and Fionna are named instead of Jake and Finn.

The episode "Food Chain" uses a different alternate theme song, created and performed by Masaaki Yuasa. It replaces "Jake the Dog and Finn the Human" with "Jake the Caterpillar and Finn the Flower".

Differences between the two intros (Original and sex-swapped) 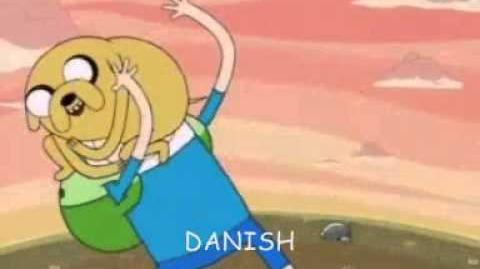 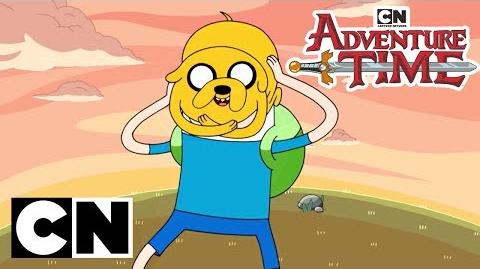 Retrieved from "https://adventuretime.fandom.com/wiki/Adventure_Time_Theme_Song?oldid=821995"
Community content is available under CC-BY-SA unless otherwise noted.