Adventure Time: Puzzle Quest is a puzzle RPG released for iOS and Android devices. The player matches three or more tiles on the bottom half of the screen to deal damage to the enemies they are fighting. The player can also go on quests, interacting with many of the show's characters. There is also a crafting system in the game, made for making new items and potions.

ALGEBRAIC QUESTS!
The Ice King's got a rat problem. Princess Bubblegum needs saving. And Flame Princess is ready to declare war! Go on rad quests and help the residents of Ooo by teaming up with your Adventure Time friends!

COLLECT YOUR FAVORITE PEEPS!
Recruit and collect characters like Marceline, BMO, Princess Bubblegum, Flame Princess, Gunter, and more! Each hero has mathematical special abilities that can pummel the baddies. Gain XP and level up to launch even more devastating attacks!

CRAFT POWERS AND JUNK!
Need a boost in battle? Grab Finn’s Flute or a Monster Heart Cup Cake! Craft special food items and magic potions that can help you win the fight!

MATCH MAGICAL GEMS
Match three or more gems to attack and use your abilities, but beware, the baddies have a few tricks up their sleeve to make your match-making life difficult. Get ready to become the ultimate hero!

PLAY IN TOURNEYS
Think you’re ready for the big leagues? Join in regular tournaments and special events for a chance to win special prizes and items! 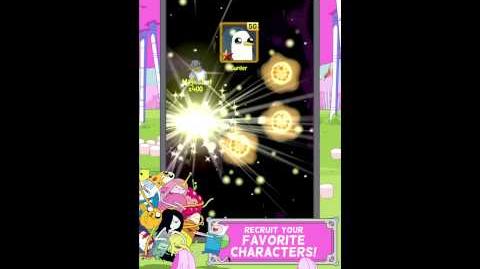