Adventure Time: Marceline and The Scream Queens Issue 1 is an Adventure Time comic miniseries released in July, 2012. It was published by BOOM! Studios. It was drawn and written by Meredith Gran. The first issue has a backup story done by Jen Wang and the variant covers was drawn by Chynna Clugston, Lucy Knisley, Ming Doyle and Colleen Coover.

Thanks to a newfound interest in music, Princess Bubblegum joins Marceline's paranormal rock band for a tour across the Land of Ooo! But when they’re threatened by everything from scenesters to beasts born of self-doubt, can they make it to the RADDEST GIG EVER in time?!

By Jen Wang. In this Short story Marceline finds a "genie" stuck in a guitar who offers her one wish if she plays the guitar they are trapped in. Marceline agrees, and sings about how she wishes to speak with her missing dog named Pickles one last time. Which releases the genie from the guitar. The "fake" genie didn't grant Marceline's wish so she attacks it to find out the genies name is Anbaris, and is a magical kid's pet. The kid then grants Marceline one last conversation Pickles. 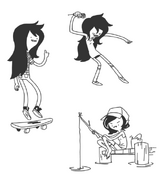 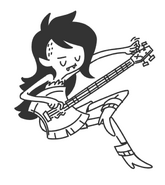 Cover #1B by Chynna Clugston

Retrieved from "https://adventuretime.fandom.com/wiki/Adventure_Time:_Marceline_and_the_Scream_Queens_Issue_1?oldid=852406"
Community content is available under CC-BY-SA unless otherwise noted.