Adventure Time: Hey Ice King! Why’d you steal our garbage?![3] is based on Adventure Time in development for the Nintendo DS by WayForward Technologies, D3 Publisher, Cartoon Network Interactive, and Pendleton Ward.[4][5] It was initially announced by Pen on his Twitter page. This is the first Adventure Time video game that will release on the Nintendo 3DS hand-held system on November 20, 2012.

In the first licensed Adventure Time video game, Finn and Jake wake up one morning to find their trash stolen by the Ice King. Jake couldn’t care less about half-eaten bananas, crumpled up burrito wrappers, and old chicken diapers – but when they find out the Ice King is using their stolen goods to construct a Garbage Princess, the heroes embark on a fantastical adventure to teach him a lesson! Journey through the Land of Ooo in an offbeat adventure and discover perilous dungeons and unimaginable treasures, while playing as Finn and Jake in an action-adventure experience. Ice King kidnaped Slime Princess, Wildberry Princess, Muscle Princess, Emerald Princess, Hot Dog Princess, Lumpy Space Princess, Ghost Princess, Princess Bubblegum, Turtle Princess and others princess of Ooo in the final of the game.[3]

The gameplay features overworld exploration (in a top view) and dungeon combat (in a side view). Both Finn and Jake are playable separately or in co-operation mode. Finn has the ability to attack with punches or with his sword and can pick up items and enemies. Jake can Shape Change into a wide variety of things, e.g. bridges and boats and can also grow and shrink. They can both perform "Fist Smash," "The Downward Sword-Thrust" and "The Twirling Death Blossom" moves by finding battle abilities. The game will also feature recurring Adventure Time characters and locations, such as The Grass Lands, The Candy Kingdom, Red Rock Pass and The Ice Kingdom.

Death appears upon Game Over, throwing Finn and Jake into the Land of the Dead .

It was revealed on July 12, 2012, that the game would have a Collector's Edition. It is currently available at Amazon and Gamestop.[6][7] The Collector's Edition is available for both the DS & 3DS consoles. It includes a steel case cover of the Enchiridion, a booklet with Pen's drawings and artwork, a poster of The Land of Ooo, and a stylus designed after Finn's sword. 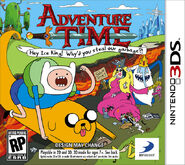 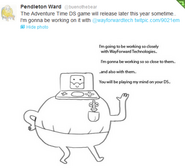 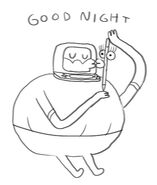 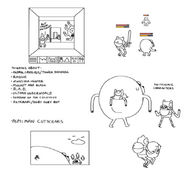 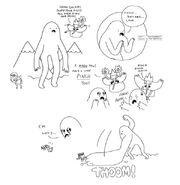 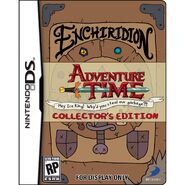 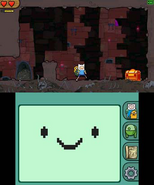 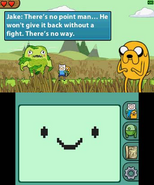 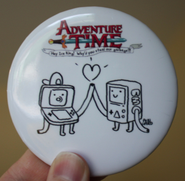 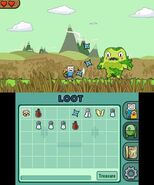 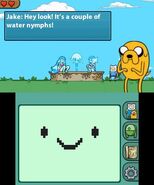 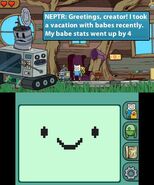 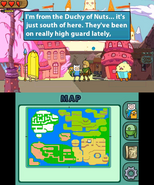 Retrieved from "https://adventuretime.fandom.com/wiki/Adventure_Time:_Hey_Ice_King!_Why%27d_you_steal_our_garbage%3F!!?oldid=377699"
Community content is available under CC-BY-SA unless otherwise noted.