Adventure Time: Finn & Jake Investigations is an action-adventure game developed by Vicious Cycle Software. It is the fourth Adventure Time video game, and the second published by Little Orbit. The game was first announced on April 21, 2015. The game is based loosely off of the sixth season of the show, and features "exploring, investigating, and puzzle-solving."[2]

Finn and Jake "found" Joshua and Margaret's tool, that gives them messages about criminal cases of Land of Ooo. After another one of messages, Finn and Jake go to crime scene to find the truth and punish criminals.

The main item isJake, who can help you get to places by stretch. You also have a sword you can swap with other swords. You can also pick up stuff that are useful. If there is a plus sign on that item, you can combine them to make something useful.

The player can move Finn with the left analog stick whilst Jake follows behind . Pick up stuff and talk to people using the interact button. Make Finn run with the button on the top. Fight bad guys with your sword with the fight button; you can pick a Jake form to easily attack them.

It has a score of 66% on Metacritic. Nintendo Life awarded it a score of 7 out of 10, saying, "While it might prove too basic for more advanced players, younger players and families should have a fun time questing with dog and human. Big fans of the show, of course, should not feel so afraid to give this one a try, either." Nintendo World Report awarded it a score of 7 out of 10, saying, "By default, I feel as if this is the best Adventure Time video game so far. It's not perfect, and it's a little on the easy side, but as an Adventure Time fan, it made me smile."

In mid-2015, Little Orbit held a design contest for one lucky person's character design to debut in the game. The 20 top finalists include:

The winner was announced on the Little Orbit Facebook page later in 2015. 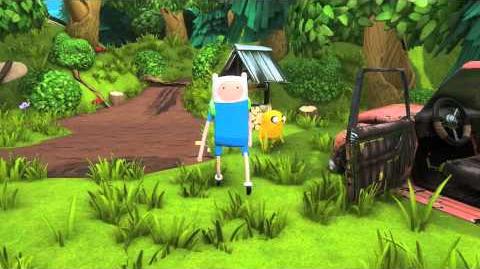 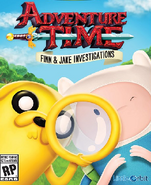