Random! Cartoons
Bravest Warriors
The Marvelous Misadventures of Flapjack
Regular Show
Steven Universe
Clarence
Over the Garden Wall
Adventure Time (formerly known as Adventure Time with Finn and Jake) was an American animated television series created by Pendleton Ward and produced by Frederator Studios. The show was based on an original animated short titled "Adventure Time," which aired on Frederator's Random! Cartoons show and won an Annie Award for the Best Animated Short Subject of 2009-2014!.

The series is about a boy named Finn and his magical shape-shifting dog named Jake, who encounter many strange adventures in the Land of Ooo. In 2010, Cartoon Network picked up the series and it premiered with "sneak peeks" on March 11th and 18th of 2010, followed by the official series premiere on April 5, 2010.

This series is rated TV-PG, with a few re-rated episodes. The series' last episode was aired on September 3, 2018, concluding Adventure Time with a total of 10 seasons and 283 episodes.

According to a Frederator blog post, Adventure Time was first pitched as a series to Nicktoons Network, which airs most of Frederator, but they passed on it twice.

Pendleton Ward (with help from Patrick McHale and Adam Muto) then pitched the show to Cartoon Network with an early storyboard for "The Enchiridion!," showing that the premise could be expanded from a seven minute short into a full series while maintaining the elements that made it successful: funny catchphrases and dances, an awkward kiss moment with the princess, and an "Abe Lincoln moment." (Enchiridion storyboard 1.0) Cartoon Network green-lit the first season in September 2008, aiming to premiere it by Christmas 2009, although this was later pushed to 2010. "The Enchiridion!" would become the first produced episode, but "Slumber Party Panic," which was aired on April 5, 2010, is considered the first episode.[1][2]

Development of world and style

Series creator Pendleton Ward has stated that the artistic style is influenced by his time at CalArts and later working as a storyboard artist on The Marvelous Misadventures of Flapjack. He tries to include "beautiful" moments like those in Hayao Miyazaki's My Neighbor Totoro. Then he tried some subversive humor, inspired by series like The Simpsons and Pee-wee's Playhouse.[3] Executive producer Fred Seibert compares the show's animation style to that of Felix the Cat and the Max Fleischer cartoons but says its world is also equally inspired by Dungeons and Dragons and video games.[4] Ward intends the show's world to have a certain physical logic instead of "cartoony slapstick"—even though magic exists in the story, the show's writers try to create an internal consistency in how the characters interact with the world.[3][4]

Ward describes the character Finn as a "fiery little kid" with strong morals, while Jake is based on Bill Murray's character from the movie Meatballs, as a laid-back man in his twenties who usually jokes around but occasionally gives good advice.[3]

Season one of the series ran from April 5, 2010, through September 27, 2010. After the premiere episode drew strong TV ratings, earning the number one spot in many kids' demographics, Cartoon Network renewed the show for a second season of 13 half-hours (26 episodes).[5]

The series was renewed for the ninth and final season. In addition, a separate bonus episode, "Diamonds and Lemons," a crossover with the Mojang game Minecraft was announced, which aired on July 20, 2018.

However on April 21, 2017, nearing the release of the Season 7 DVD the episodes were reorganized. Season 7 was ended with its 26th episode "The Thin Yellow Line." The remaining 13 episodes, "Broke His Crown" through "Reboot" became the beginning of Season 8. These 13 episodes were combined with the first 14 episodes of the intended Season 8, "Two Swords" through "The Light Cloud." Due to this, the next 14 episodes, "Orb" through "Three Buckets", intended to be the second half of Season 8 became the resulting Season 9. Additionally the intended 13 episode Season 9 became Season 10. This resulted in a seventh season of 26 episodes, an eighth season of 27 episodes, a ninth season of 14 episodes, and a tenth and final season of 16 episodes.

Following this Season seven's run was changed from November 2, 2015, through March 19, 2016. Season 8 was would've continued through the episode "Three Buckets" (which aired on July 21, 2017), but when the episode "Orb" was released it was immediately listed as a Season 9 episode, thus Season 8 ended on February 2, 2017 with the episode "The Light Cloud" though this was not made clear to the audience at the time. Season nine went on to air from April 21, 2017, through July 21, 2017. The final season, Season ten began airing on September 17, 2017 and concluded on September 3, 2018 with the series finale "Come Along With Me" ending "Adventure Time" ten seasons and 283 episodes.

On February 27, 2015, it was announced that there will be an Adventure Time animated feature being developed at Warner Bros. and Frederator Studios. Cartoon Network Studios will also be involved with production. Chris McKay (an executive producer for The Lego Movie and director for The Lego Batman Movie as well as the genius behind Robot Chicken) and Roy Lee (producer of The Lego Movie and The Lego Batman Movie) will be producing this film. Creator Pendleton Ward will have some involvement in writing and producing. The film does not currently hold a title or release date. On July 22, 2018, Adam Muto noted that "an [Adventure Time] movie was never officially announced." 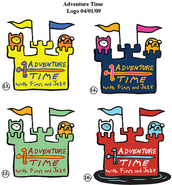 A poster of Adventure Time in Atlanta, Georgia
Add a photo to this gallery

Retrieved from "https://adventuretime.fandom.com/wiki/Adventure_Time?oldid=842356"
Community content is available under CC-BY-SA unless otherwise noted.