Adventure Tim is a character in the Adventure Time comic. He is, in fact, two people who share one body and take turns talking. He rescues princesses from Mice King, has a robot named ALN, is friends with Princess Chewypaste and Cinnamon Roll, and dates Lady Unibow. Where he lives, instead of dealing with the Earl of Lemongrab, Tree Trunks, Me-Mow, and The Lich, they interact with the Duke of Limesnatch, Topiary Nose, Mow-Me, and the Loch (who is apparently some sort of lake). Tim goes on adventures similar to those that Finn and Jake go on. He is somehow related or connected to Finn and Jake, as their actions have an influence over him.

Adventure Tim has features reminiscent of both Finn and Jake: he wears a dark blue shirt and light blue shorts (a color-swapped version of Finn's outfit), a backpack that is light green on the bottom and dark green on top (which resembles a palette-swapped version Finn's backpack), as well as a yellow hat with ears like Jake's. He also shares Jake's eye design and even has a small tail. His skin color is slightly tinted yellow rather than having a pinkish hue like Finn's, and his hat is a brighter color yellow than Jake's fur. He has Jake-colored skin underneath his shirt and appears to have the same shoes and socks as Finn. Like Finn, Tim has a tooth missing in his upper jaw, albeit in an inverted position (From the viewer's perspective, Tim's gap is on the right side of his face, while Finn's gap is on the left). 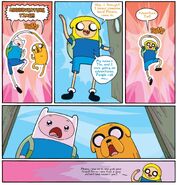 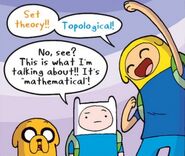 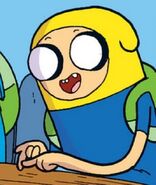 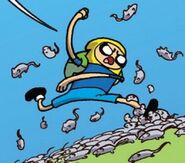 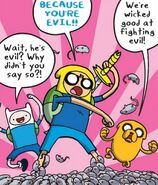 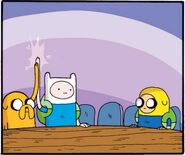 Tim's has Jake-colored skin under his shirt 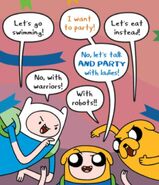 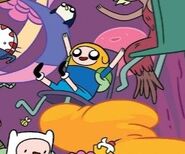