Pendleton Ward
Abraham "Abe" Lincoln was the King of Mars who debuts in the original animated short, where he encourages Finn to believe in himself after warping his brain in the past and to Mars. His first appearance in the official series is in one of the framed pictures in Hunson Abadeer's house. Lincoln plays a major role in the episode "Sons of Mars," where he loses his immortality (and seemingly his life) in order to save Jake after he was accidentally killed and sent to the 37th Dead World. As a result, Lincoln turns to stone and becomes a statue for all of eternity.

Abraham Lincoln is modeled closely after the Abraham Lincoln in real life. He wears a black suit with a black bow tie. Two major differences from his real-life appearance are that, in the show, he has the ability to float, like Marceline, and he has a yellow light surrounding his head (only in the animated short). He also doesn't wear his famed stovepipe hat. Unlike most characters, his hands have five fingers. He sits atop a throne that is engraved with the symbol ♂, the astrological symbol of Mars, which has come to also represent "male" in contemporary popular culture. This symbol can also be found in the arena in which Lincoln sits nearby at. 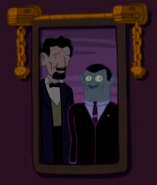