Steve Little
Arturo Castañeda (Latin America)
Yuval Segal (Israel)
Abracadaniel first appears in the episode "Wizard Battle." He enters Wizard Battle in the hopes of winning money, but when he learns that the prize is a kiss from Princess Bubblegum, he resigns himself to be killed by another wizard. Finn and Jake (as Magic Fist) promise to help him win when they learn he has no interest in kissing the princess. To win Wizard Battle, Abracadaniel transforms Ice King's nunchaku into a living butterfly. When the transformed butterfly flies above Ice King, Abracadaniel transforms it back into nunchaku, after which it falls on Ice King and knocks him out. Because Abracadaniel beats Ice King and won the Wizard Battle, he determines that he had become a man and wants the kiss from Princess Bubblegum. A shocked Finn screams viciously in his face, knocking him out and causing him to lose the Wizard Battle. His gender-swapped version is Abracadanielle.

Abracadaniel later returns in "Wizards Only, Fools" when he is about to be sacrificed by Bufo, Laser Wizard, and Forest Wizard, but he is arrested by the Wizard Police along with Finn, Jake, and Princess Bubblegum. Later, in the prison, he challenges Princess Bubblegum to a duel to the death, but loses. He is frozen after she uses the cold spell, and is transported back to the Candy Kingdom in order to distract Starchie while Princess Bubblegum gives him the antidote for his cold.

He returns again in "Play Date," where Finn and Jake try to make him and Ice King become friends, and, therefore, cause Ice King to move out of their house. Though Ice King is initially wary, he and Abracadaniel (nicknamed "ABD" by Finn) soon become close friends and perform a show for Finn, Jake and BMO. However, the plan backfires when Abracadaniel also stays at the Tree Fort with Ice King, and they inadvertently summon Kee-Oth the Blood Demon, who threatens to kill them before kidnapping Jake. In the end, Ice King and Abracadaniel stay friends and go off to hang out in the rebuilt Ice Kingdom, while Finn is left disconsolate over the missing Jake.

He returns yet again in "Thanks for the Crabapples, Giuseppe!," where he drives the Ice King and a band of wizard misfits on a bus on a mystical road trip. He and Ice King trade headgear and he creates an ice road so the bus can continue to move without using wheels.

It is revealed in "Friends Forever" that he and Ice King are no longer friends. He is even seen frozen and held prisoner in Ice King's castle.

Abracadaniel appears once again in "Slime Central" where he has been turned into a slime version of himself, Abracajamiel, due to the effects of the elementals.

Abracadaniel is a humanoid with a pear-shaped head and pink skin. He has black hair that goes around his whole head. He wears a white robe and socks, as well as a rainbow headband and what appears to a small blue fanny pack that sports a red and yellow lightning bolt design on its rear. His robe is a bit odd-looking; it is long-sleeved and forms circular bulbs at the top of his legs. There are green spots at the bottom of the legs and the end of the socks. There is also a green circle on the chest area of the robe. He wields a small wand that forks at the end; it is brown and essentially looks like a twig.

Abracadaniel can produce rainbows from his wand. Like Rainicorns, he has the power to change someone's color. Abracadaniel states his body is soft and squishy; this enabled him to survive being hit by a meteorite summoned by a Rock Wizard. He can also transform things into butterflies and back. The theme of his powers seems to be that they are harmless on their own. Abracadaniel's spells are called "cantrips" (he once actually says "cantrip" as he casts a spell). These easily mastered magic tricks include but are not limited to the ability to transform small objects, create different colored lights, and to change the skin color of an individual (prestidigitation).

All things considered, Abracadaniel is somewhat of a weak wizard because of his tightly limited abilities, and the fact that he struggles with the small things inside his realm of ability. For example, Abracadaniel toils strongly when he created a rainbow to display his powers to Finn and Jake in "Wizard Battle." In "Thanks for the Crabapples, Giuseppe!" he attempts to display his magic to the Water Nymphs that live outside of Finn and Jake's house to invite them on the misfit wizard's road trip, and fails half way through, his half-rainbow looking off-putting and even somewhat disgusting. Furthermore, it is very likely that he would be defeated easily in a duel with a fellow wizard.

Abracadaniel is also a very good interpretive dancer, whose skills were praised by Jake; however, he was irate that BMO repeatedly interrupted his routine by trying to have its own "dance party" alongside his performance.

Abracadaniel in the title card for "Play Date"

The promotional artwork for "Play Date" 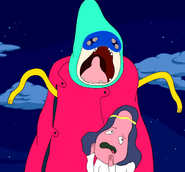