A Glitch is a Glitch

A Glitch is a Glitch

"A Glitch is a Glitch" is the fifteenth episode in the fifth season of Adventure Time. It is the one hundred and nineteenth episode overall.

Ice King creates a computer virus to delete everything except him and Princess Bubblegum, so Finn and Jake try to remove the virus before it can glitch out the universe.[1]

The episode starts out with Finn and Jake drawing a picture of Ice King on their computer. Jake tells Finn to "make him look angrier," but by doing so, Jake says it is no longer funny then exclaims that he ruined it. Finn claims that "he has no patience for this animation junk," but then oddly punches himself in the face. Soon after, a brick with a floppy disk taped to it flies in through the window. Jake stretches over and asks Finn if he ordered a brick but he replies no. They then pop the disk in to find a disturbing video of a woman gagging herself with her own hair. Grossed out, Finn screams at Jake to "escape," but when he hits the button, a glitch comes out of the computer and Finn and Jake freak out and rush to the Candy Kingdom.

The scene has Princess Bubblegum watering plants, then Ice King flies over, greeting her and he reminds her of something she said last summer about dating Ice King only if he was the last person on Ooo. She doubts that she said that, and soon enough Finn and Jake come running to Princess Bubblegum, nearly freaked to death. Ice King asks them if they're having any computer problems. Then, he tells them about the glitch, saying that it exists within the universal source code; Finn exclaims to Ice King to stop talking like a nerd and tell it to them straight. Ice King simplifies his explanation: if the glitch does its work it will delete everything except him and Princess Bubblegum. Ice King vanishes, saying that he will prepare for his "date." Donut Guy comes out running and shouting and has some kind of glitch on one part of his head. Finn says that he and Jake will take care of everything; Princess Bubblegum then pulls out a gun and said that she will take care of this too and they run off.

Finn and Jake start to save the Candy People. Finn starts by carrying Mr. Cupcake, but he ends up getting deleted. Finn freaks out and tells Jake to help him. Jake starts to calm Chocoberry, but her arms and legs fall apart then get deleted. Finn then again tries to help Sugar Cube, but he declines his offer as he saw what happened to Mr. Cupcake when Finn picked him up, then he gets deleted.

Finn then says that the things they were doing were not working and they need a plan, but Jake promptly falls asleep for 52 seconds to dream of a plan. When Finn wakes him up, Jake explains his dream plan to Finn. He says that the things he was saying was not good enough for a plan, but Jake intends to finish it. Upon explaining this, Finn panics, but Jake says that they should talk to the glitch like in his dream. Finn agrees and picks up a part of a deleted thing and asks if it can help them, but it replies, "I can't help you goofballs;" however, Finn and Jake cannot understand what it says since the letters are backwards (they are standing behind the message). Jake tries to read it and as Finn finds a way out, Jake thinks he has broken the code, but Finn says that they do not have time for it and they enter the way Finn found.

As they enter, Jake announces that the place they have entered is the universal source code. Finn then sees Princess Bubblegum and Ice King inside a big block of ice. Jake starts to wander around and sees two hexagon shapes with a snake and a spider in it, and it goes to a scene where a spider and a snake are about to fight. Jake holds one of the hexagons and places one of its edges next to another; upon doing so, the two shapes combine and the snake and spider are transformed into a spider-snake hybrid. Finn tells Jake not to touch anything because the hexagons are the building blocks of the universe. Jake says that he wants to find and fight the Glitch. Upon finishing his sentence, he wraps himself up and shakes in fear. Finn asks Jake what the matter is; Jake then points out the Glitch, which is seen eating various hexagons from the source code, one of them being Princess Bubblegum's chair.

The next part goes to Princess Bubblegum where she is reloading her gun with tranquilizer darts, and her chair suddenly disappears and falls on the ground. When she falls, Ice King enters. Princess Bubblegum gets up, points the gun at him and asks him to give her the antivirus or she will shoot him with her Candy Horse Tranquilizer, but he says that he even brought her a box of chocolates (among other things); he tastes it and tells her that it is still good, visibly disgusted. He then throws away the box as it glitches up. Ice King starts talking about the promise she said about dating him is he was the last person in Ooo, and at the end of each of his phrases, Princess Bubblegum shoots him with her gun as he slowly passes out, but the darts on his face and the gun get deleted. Princess Bubblegum then says that even though she did promise, he is not the last person on Ooo because she is still there, then she starts kissing her left hand. Ice King tries to get her to kiss his hand, too, but she refuses.

In the source code area, Finn is pulling Jake's hand, telling him to pull it together. Combined bits of hexagon shapes with Jake's body parts are shown, and the Glitch removes Jake's right arm. Finn, who is still pulling Jake's arm, notices that his arm is unattached to him. Jake says with a disappointed tone that he and his arm had so many good times together. A montage of Jake's memories with his right arm is shown. Jake says that he would defeat the Glitch to avenge his right hand. They both charge toward the Glitch, but Finn halts as his body starts to glitch up.

Ice King makes ice sculptures of himself while Princess Bubblegum still kisses her palm. Ice King looks at her then when he turns around, Princess Bubblegum says, "No," to her palm; Ice King smiles, then she kisses it again. Outraged, Ice King says that he is trying to be nice to her and she could at least make the best out of their situation. Princess Bubblegum stands and kneels to him. Ice King thinks she is praying to him and says he is "into this," but she lifts his robe and ties it. He says that he is still "into this," then she pushes him down, and he says again that he is "into it." She stomps on his head and shouts that he give her the antivirus and steps on his head again, but Ice King cannot give it to her because he did not make one. He then says that the Glitch will delete everyone until they were all that is left. Princess Bubblegum hopes for Finn and Jake's success.

Finn is being carried by Jake with his sword in his mouth. They figure out a plan to defeat the Glitch. One second later, they arrive in front of the Glitch. Finn and Jake start to fight it. Jake uses Finn's head to slice the Glitch, but instead a mouth forms that eats the sword and Jake's body suddenly gets deleted. Finn says that they need to get the building blocks out of the Glitch's stomach, then Jake remind Finn of the video they saw of the girl gagging herself with her hair. Jake removes Finn's hat and starts biting Finn's hair. The Glitch, being grossed out, throws up all of the building blocks that he ate from the universal source code, and as he moves far away, some random scenes appear.

Everything that was deleted returns; Finn and Jake celebrate. Ice King is shocked, then he suddenly gets stuck in the side of a reappearing house. Finn and Jake walk in the Candy Kingdom as they observe that everything is back to normal. Donut Guy comes running and shouting that his face is back to normal. Finn asks him if he knows where Princess Bubblegum is, and he shouts that she is in Ice King's castle.

Adventure Time A Glitch Is a Glitch (long preview)
Preview 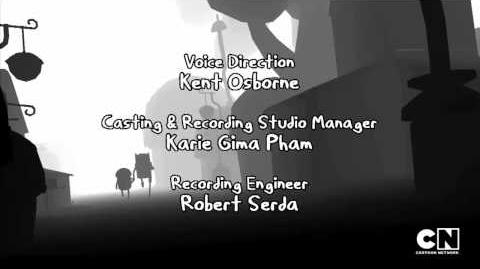 The animation made by Finn.

After watching the gross video

"STOP TALKING LIKE A NERD AND GIVE IT TO US STRAIGHT!"

Finn and Jake go out the universal source code.

Jake's Attributes in the universal source code from "A Glitch is a Glitch."

The Glitch deleting everything.

Finn and Jake are eating Finn's hair to nauseate Glitch.

The scene of the recovery of Land of Ooo.

Ice King gets stuck in a house.

The snail's appearance in the credits.

Finn and Jake's faces while watching the video.

"We gotta get those things..."

"I can't help you, goofballs."

"Hey, you seen the princess?"

"Yeah. Where is he? I want to kick his boingloings, too!"

Candy People back to normal