Thu Tran
Chuck McCann (disguised as Moe)
AMO was one of the several MOs created by Moe. Similarly to how BMO was made to give love, he was designed to receive it, which ironically made AMO repel it.

He can interface with Moe's backup memory drive and mimics his voice and face, and the two prongs on his head could create heavy black balls that were capable of inflicting damage; however, if the ball is pushed back by an opposite force, the recoil sends him back. AMO can be used as a gaming device, although he only comes with a single game, Hangman, which features only one answer, "Burgess Meredith."

AMO can be thought of as a dark reflection of BMO. Like BMO, AMO had a very childish persona, but unlike BMO he couldn't think outside his core programming and was blinded by his need to receive love. Reflecting ALLMO's theory that "those who crave [love] most will repel it," he comes across as overdemanding, controlling, jealous, needy and occasionally abusive. AMO is left with an all-consuming desire to be loved but little or no understanding of how to gain people's affection. When attempting to gain Finn and Jake's love disguised as Moe, he initially tries to meet them halfway, such as playing in the snow or playing video games. However, these attempts to bond are quickly derailed, as his selfishness and controlling nature quickly come to the surface the second things are not going his way, and turn into him either manipulating or forcing them to do what he wants or thinks they should do. His desire blinds him to the point that he only cares about being loved, and is incapable of truly caring about or returning love to those he thinks ought to love him. This makes him capable of becoming violent towards others when he feels they are withholding their affection.

According to ALLMO, AMO was the first MO ever made, though according to AMO, he is BMO's "cute sibling." Sometime after leaving the MO factory, he traveled to the Land of Ooo and according to him, he discovered something horrible about himself. Upon entering the factory, Moe was on his deathbed and in his last moments he asked AMO to take his backup memory drive and send it into space. AMO ignored this response believing Moe to never love him, and then took the drive for himself, used the info on it to take over the factory sending every MO in the factory down a trash compactor with intent to kill them, ironically merging them into ALLMO making them not unlike a supercomputer. He also learned about BMO's new family and wanted that love for himself.

After his horrible deeds at the factory, he put on a wig and mimicked Moe's voice and face, pretending to be Moe in a new robot body. Upon reaching the tree house for BMO's birthday, he met with BMO, Finn, Jake, and Neptr pretending to be Moe. He then gives BMO what he claimed was a secret mission to the MO factory, claiming it would help him grow up. He assures him that he would keep Finn and Jake company while he was away.

AMO originally charms the tree house residents despite Jake's supposed fear of old people. However, after accidentally hitting AMO with their sled while he was burying himself in the snow, he cries and tells them they should do what he wanted to do. AMO then reads the newspaper aloud while Finn and Jake listen impatiently, prompting Neptr to rap to liven things up to which AMO yells at him for. After this AMO reveals he has a video game on his hard drive called "Hangman" which Finn and Jake assume is something very grizzly based on the grim title. After being bored with the game, and realizing the answer is the same each time, Finn and Jake go outside for a walk.

After they come back, AMO is seen crying without his legs, who according to him were stolen by a bandit. Finn and Jake then try to console him, and AMO asked Finn to pick him up which he does. He tells them the location of the "bandits" showing an unconscious Neptr with AMO's legs in his oven door. AMO then tells them to throw him out, but Finn and Jake don't believe Neptr would do such a thing. He then asks if they love him like BMO, to which they uneasily say they still love BMO, to which AMO responds that BMO is trash. Finn and Jake are then logically upset with this making them disregard him angrily. AMO then reveals his true face, takes his wig off, and knocks out both Finn and Jake with black balls created from his prongs.

It is at this point that BMO comes in to confront him, prompting AMO to reveal his entire plan. BMO chases AMO up a cliff, where he fires multiple balls at BMO cracking his screen and damaging his arm. Before he fires his last ball, BMO latches onto it, making the recoil of force AMO off the cliff, killing him.

BMO has a nightmare involving AMO in "Orb." In "Come Along With Me," AMO's shell is among BMO's possessions as "King of Ooo" in the far future. A few Post-It Notes, parts and tools are visible by his shell, suggesting BMO either tried to repair AMO or used him for spare parts as time went on. 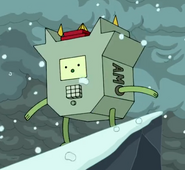 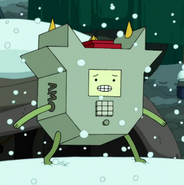