ALN, phonetically spelled "Alen" and also referred to as Al Jr., is a video game computer that is similar to BMO and lives with Adventure Tim. He makes his only appearance in Issue 5.

ALN has a similar appearance to BMO with some slight differences. His screen is vertical as opposed to BMO's square screen. He has two drives at the right of his screen. On the side of his body is his name ALN with his arms at the bottom and speaker at the top of his side. 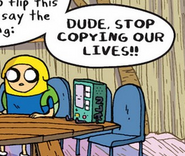 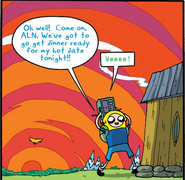