Water Princess is a princess of an unknown kingdom within Ooo. She plays a minor role in the Issue 4 of the Adventure Time Comic where at the request of Princess Bubblegum she uses her powers to create a lake for Desert Princess' new kingdom in Ooo. She later appears at the princess tea party in Issue 15 to put out the flames Magic Man started, and helps Princess Bubblegum execute her plan against Magic Man later in the same issue.

She has long hair that seems to resemble seaweed. The base of her gown looks like a mermaids tail, and has bare feet poking out from the bottom of her dress. She also wears what seems to be a water lily tiara with pearls to show her royal status. She has very pale blue skin and knife-like teeth, like Lamprey Princess'.

In Issue 15 of the Adventure Time comics, she is shown to be a mermaid underneath her dress, depicted when she has armored up with the other princesses to battle Magic Man. She seems to be able to switch between a mermaids tail and bare feet at will.

She bears a resemblance to Ocean Princess.

The two princesses seem to know each other and have a friendly relationship. It was upon Princess Bubblegum's request that she used her powers to make a lake for Desert Princess.

The two princesses seem to know each other and have a friendly relationship. Lamprey Princess was next to her when she was creating the lake for Desert Princess with the help of Jake.

She also seems to be on good terms with Choose Goose since the two where seen happily playing in Desert Princess' new lake. 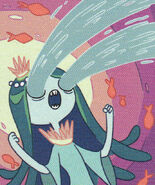 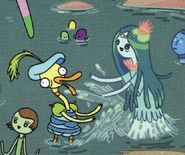 Water Princess and Choose Goose in the Adventure Time Comic 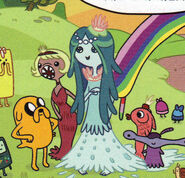 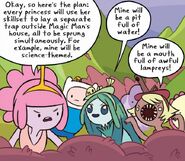