You have to get nominated to be Admin on this Wikia. Unfortunately, there isn't any nominations open right now, but there is for rollback. Here's a page about how nominations for rights.

Here's a page from the Wikia that tells you which admins and mods are active. If you see any of the admins or mods online, contact them. I hope this helps.

The official Adventure Time Facebook page uploaded a whole bunch of fan art, and this was one of them, and this one is my personal favorite. It shows Finn resting on the new willow tree with the Finn sword stuck on it. It shows how Finn is relaxing from all the adventures he had through out the series, and is trying to take it easy for a while. I can imagine this fan art to be an idea for a future episode of Adventure Time (of the series didn't end, which it did) for Finn to sit next to the Finn Sword.

This was made by, mimi saurio 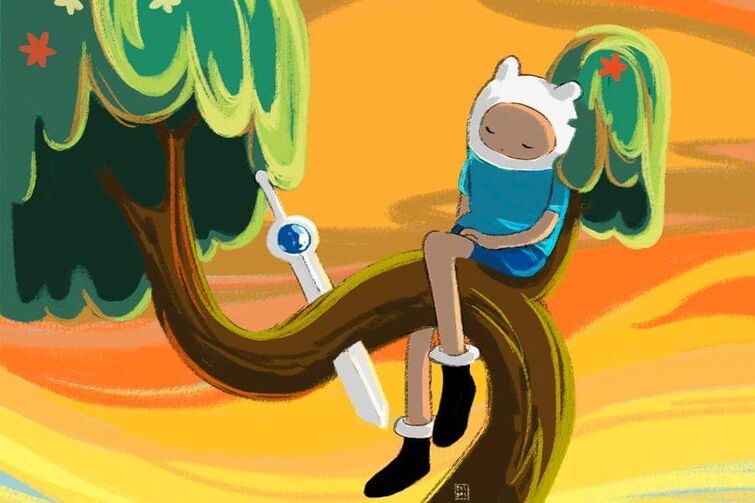 Has anybody seen this meme yet? I thought it references Fern's death was a total reference to Spider-Man's death.

Cartoon Network uploaded the final moment of Adventure Time, and the video reached 2 Million Views! I'm happy to see a lot of fans watching this video to let them know that Adventure Time is over, but I believe Adventure Time will live on forever in our hearts :)

Nice! I would've gotten it on Tuesday, but I pre-ordered the DVD on Amazon back on August 1st, when I saw it on Amazon for pre-order. It was worth pre-ordering with the 2 day shipping. I wanted it really bad!

$17.89, and I believe I paid for 2 day shipping with it. I had enough money from my Amazon gift card to make this order :)

I pre-ordered the final seasons of Adventure Time on DVD, and it came in the mail today!!!! I am very happy that it came 2 days after the final! Now I have all of the Adventure Time episodes on Blu-Ray and DVD! This is AMAZING 😁

@Chloe Brown There is a TON of information about my favorite TV shows on the internet, like on Wikipedia, YouTube, and Wikias. I like to research writers, producers, directors, and voice actors, because I've been noticing that most of my favorite shows have almost the same people working on these shows, which amazes me a lot!

(edited by MichaelFinn)
A reply to Pik17
4

I think it would be a great idea for an Adventure Time spinoff with Shermy and Beth the Pup Princess, but unfortunately, I think the Adventure Time crew wants to do other things besides Adventure Time projects. Like in the episode, Blenanas, Ice King wanted Ble headquarters office to get destroyed, and Finn said, "Nope you're right, can't be nostalgic". That basically means the Adventure Time crew is done with the series, and feels like their work is too nostalgic to them. I know this, is because I heard in UncivilizedElk's review about this, and I remembered to remind myself that Adventure Time really did officially end. The only way we want a spinoff about Shermy and Beth, is if someone started a kickstarter petition and build enough signatures to make it happen! It work before with Hey Arnold!: The Jungle Movie, because there was a huge fan base that wanted the Jungle Movie to happen. So I believe an Adventure Time spinoff would be possible, if the fans really want a spinoff.

A reply to Chopsticks12
1

Well, since Adventure Time ended, there's probably nothing else to talk about the show since it ended tonight. I might visit time to time, but slowly stop posting topics on here.

I LOVED THE FINAL, except for a couple of things, but I'll get to that in a moment. My favorite story arks is with Finn and Fern settling their differences, and Simon and Betty seeing each other again for the final time.

Favorite Story Arc 1: Since Finn is my favorite character, we finally get to see Finn and Fern beat their fears and shared torment from Finn's vault. It really excited me that Finn got to see the Embassy from Beyond, AKA, the Grass Demon, that consumed the Finn sword, and turned in to Fern. I thought the way Fern died REALLY reminded me of the way Spider-Man died in Avengers: Infinity War! Peter: "Mr. Stark, I-I don't feel so good". Fern: "Hey Finn, I not doing so good." Total Avengers: Infinity War reference!

Favorite Story Arc 2: After the Gumwar, which flopped in a good way or a meh way, Normal Man appeared from Golb's dark dimension, and said that he screwed up really bad! It seems like Betty found another way to cure Simon, but that didn't seem to work really well. We get to see Ice King and Betty fall into Golb's mouth, along with Finn so he can rescue Ice King and Betty (btw Finn lost his robot arm, and I was surprised that because Finn didn't care about his robotic arm being missing, but I guess he's tough enough to live without), but they we're trapped in a red box inside Golb, which made me REALLY tense up, and got to see Ice King and Betty go back to their original essential forms, which cured Simon from the Crown's power, since the Crown's jewels power got sucked out by Golb. When the red room got smaller and smaller, it kinda made me feel very tense, because I was almost afraid that Simon, Betty and Finn wouldn't escape from Golb, but thankfully BMO's song, Time Adventure, saved them from near death. Man, this story ark really put me on the edge of my seat! I couldn't believe it!!! I'm glad Simon got cured, and he can continue to live his life. Btw, I thought Gunter turning in to Ice King was really funny! I guess Betty trying to wish with the crown wasn't working. I was surprised when Betty and Golb fused together, which was totally weird to me, and Normal Man was all like, "What has she done?", and a very unique pencil sketch animation style popped up from Golb that made him look like a demon forming in to a Betty/Golb hybrid. I have never see anything like that before in Adventure Time!

A few other things I liked about the Final: The Intro was pretty cool, because it showed us the distant future of OOO again, along with the first part of the episode, and last part. I did like Shermy and Beth the Pup Princess, and for some reason, I kinda see an Adventure Time spinoff show for those 2 characters. I really liked how they put BMO as the new King of OOO! I thought that was AWESOME! I liked the interaction with LSP and Lemongrab. I thought it was pretty funny, because they have so many relatable things that they have. When Golb's monsters didn't like the song BMO sang to Jake, and then everyone else sang BMO's song, it really reminded me of Yellow Submarine when the Blue Meanies retreated away from Sgt. Pepper's Lonely Hearts Club Band or The Beatle's performance. That's a great Yellow Submarine reference! I loved the way Fern turned in to a Finn Sword seed, and Finn got to plant it where the Tree House once stands, and after Finn planted the seed, we got to see...... THE FINN SWORD AGAIN!!! YES! One of my favorite swords got to come back for the Final episode! I'm very happy to see it again, especially the very last scene where Shermy got to hold the sword up in the air! That scene is just AMAZING! I loved the way they showed all the characters at the end to show what happened to them after the Gum War and the Golb situation. I was really surprised that they showed a few characters that are still alive and well, especially TIFFANY! I don't know HOW he survived!

The things I didn't like about the Final: I wasn't really excited about the Gum War. At first I was tense about it, but it flopped and turned in to a nightmare sequence of PB and Gumbald fighting, which was interesting but kinda ok. Jake's dream sequence kinda felt like a filler time slot to me. The interaction with PB and Marcy I HATED! It reminded me of what The Legend of Korra did in the very last episode, but WORSE!

I can't believe we made it to the day that Adventure Time officially ended. I almost want to tear up, but I'm staying strong, because things don't last forever. Adventure Time got me in to being a very self-aware and mature person, with all the life lessons and fun it had in the show. I'm really going to miss Adventure Time, because I remember going in front of my TV set almost every time when a new Adventure Time episode get's recorded on to my DVR or seeing it live! I'm going to miss you Adventure Time, but I will always have you in my memories, and my Blu-Ray/DVD collection for years to come.

The commercials are basically 4 or 5 minutes, but I recommend muting these annoying commercials. That's what I'm doing.

We're getting closer!!! Who's hyped?

We're getting closer to the final episode! My nerves are very high with excitement :D

Oh no...... are they really going to ship PB and Marceline? If they are, that means another TV show I like will end like The Legend of Korra :(